Developers desperate to get their hands on a certain component should be wary of a swelling "gray market" of counterfeit parts.

Many experts believe that the global chip shortage could extend deep into 2022—only fueling existing concerns over semiconductor availability.

The auto industry has been hard hit by the chip shortage. Image used courtesy of the Semiconductor Industry Association

Alarmingly, the counterfeit chip market now exceeds $75 billion in global value; counterfeiters, therefore, are massively incentivized to cash in. This problem isn’t going away anytime soon, especially given the many complex dynamics at play.

For one, sweeping demand for 200mm and 300mm wafers has officially outpaced supply as device makers scramble to procure both low-cost and highly advanced semiconductors for their products. COVID-related production halts and slowdowns have only worsened the situation. This predicament arrives in lockstep with the increased adoption of 5G, electric vehicles, and IoT devices. Gamers in the console and custom PC markets are also driving consumption. Shortages have even led automotive companies like Toyota, GM, and others to slash production. Even perennial silicon buyers like Apple are bearish on their upcoming sales projections.

Considering that U.S. global semiconductor market share has plummeted 25 percent in the past 20 years, it’s clear that domestic production must accelerate to counteract these challenges. The architects behind the recent CHIPS for America Act have argued this same point, as has the Biden Administration. Additionally, giants like TSMC and GlobalFoundries are pouring billions into American manufacturing expansion.

What Is the "Gray Market?"

Never has the adage “when there’s a will, there’s a way” rang so true. Because suppliers can’t reliably make factory-direct purchases, many have started exploring alternative avenues. This production vacuum has given exploitative fabricators opportunities to flourish.

We’ve seen a growing “gray market” for semiconductors as a result. Numerous counterfeit chips threaten to infiltrate supply chains—as desperate companies hoping to bolster their component stores have turned to third-party marketplaces. We call this gray because while the purchase mechanisms are legal (unlike the black market), the chips sold are clearly misrepresented as genuine. False packaging, serialization, and hardware markings are designed to swindle buyers.

The Danger of Gray Market Components

Eventually, these components may make their way into commercial and consumer devices. While not all counterfeit semiconductors perform poorly, there’s no data to support their long-term dependability.

The issue even transcends counterfeiting. Many dishonest sellers are passing off damaged, aging chips as brand new. This can lead to increased warranty claims, replacements, and expenses for all parties involved. 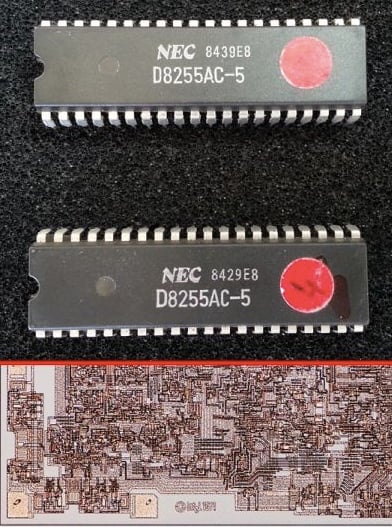 From the outside packaging, fake chips can look nearly identical. In this image, the bottom chip is counterfeit. Instead of an NEC programmable peripheral interface, the fake chip contains an Intel chip. Image used courtesy of Test and Measurement Tips

Counterfeiters often use laser engraving and chemical thinning to replicate OEM markings. These can melt bonds and degrade the overall package. Underlying metals may be exposed and become susceptible to corrosion. Acid treatments aimed at cosmetic improvements also damage pins and solder—especially when used liberally or when counterfeiters don’t properly wash away excess residue.

Testing and inspection are vital processes when it comes to catching fakes. While engineers and assembly workers may be trained to spot inconsistencies, some hardware problems can evade the naked eye.

This is where machine-based QA comes into play. Companies like Creative Electron and others have developed imaging techniques designed to catch bad chips. X-ray fluorescence analysis and energy-disruptive spectroscopy probe deeply into chip structure. While expensive and most suitable for larger yields, this is a reliable way to spot internal inconsistencies. It’s then somewhat easy to confirm whether a chip is genuine. 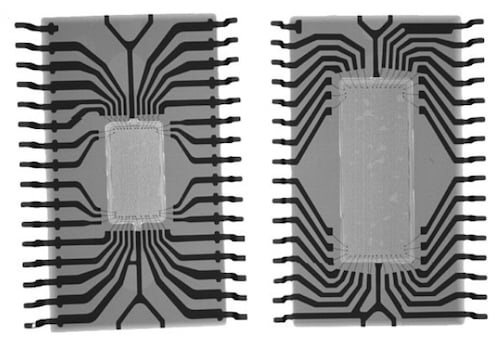 There are also two types of functional testing that manufacturers can use. The first involves simply running voltage through components and assessing truth-table conformity. Though exceptionally effective at uncovering glaring issues, it doesn’t dive deeply enough to test tolerances. The second variant, curve-trace testing, aims to solve this by applying voltage currents between IC pins.

The resulting I-V curve is plotted and analyzes a dynamic current’s relationship with voltages and potential differences. Specific chips should perform to a certain spec. This is a reliable way to weed out any imposters. Modern detectors have multiple channels, and can concurrently test all pins on an IC. Non-destructive methods like these are vital when every chip matters.

Example of a component health report from Altium 365. Image used courtesy of Altium

This removes plenty of burden from engineers, who might otherwise be apprehensive about their device internals.

Do Your Due Diligence

What if you’re an individual designer? The waters become understandably muddied by comparison when hobbyists and smaller shops might lack the resources or expertise required to spot fakes. Their purchasing avenues are more retail-based, and it’s not unreasonable to approach these electronics outlets with greater skepticism. The gray market is almost omnipresent, and knowing what to look for—plus asking the right questions—is key to minimizing your risks.

A Joint Effort to Stall the Gray Market

The onus is also on distributors to conduct ethical business practices. Independent suppliers to these franchises are also contributing to the growing counterfeiting problem, either knowingly or otherwise.

It’s rare to find a method with 100 percent reliability in detecting fakes. However, companies and individuals have additional legwork to do in undermining bad actors.

The Defense Department will have to stop using circuit boards, made in China and other potentially...
Read More

Computer memory and data storage manufacturer Micron has admitted that measures to tackle the...
Read More

The chip shortage could lead to an era of hardware innovation